aristidesfl 9 years ago • updated by Reinout Roels 7 years ago • 15
Open Recent doesn't work as expected and doesn't integrate well with the system.

Somethings don't work as expected, others are broken and it doesn't look the same. Here is a screenshot from TextMate: 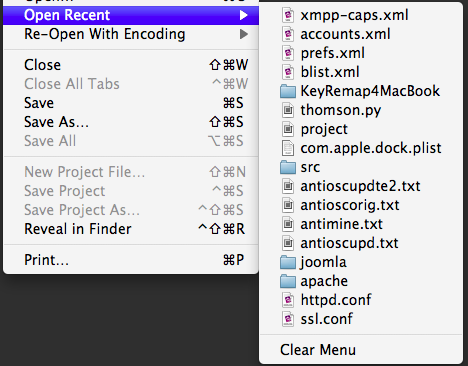 Some of the issues I find, besides the looks, are:

- Every file appears in the list. Even files opened thru the sidebar or go to file palete. This is not desirable. Only opened folders and files which don't belong to any of the folders in the sidebar should be in that list.

Without knowing anything from Sublime Text 2 implementation, I risk to say, using the default OS X API's to provide this functionality would probably fix these issues.

+3
Sindre Sorhus 9 years ago
I completely agree, the current implementation is very annoying.

- It should only show icon and filename as default, as illustrated by OP.

- If you press for example Option when viewing the list it should expand to show the full path, with the path grey and the filename still black:

+4
Sven Axelsson 9 years ago
Before the Open and Open Folder commands were joined, the Open Recent list had two sections, one for files and one for folders. Could we get that back please? As it is now, folders get pushed out of the list very quickly.

+2
aristidesfl 9 years ago
I think that is happening because too many files are behing displayed on the open recent list.
I believe files opened by the use of the sidebar or the goto anything pallete should not be displayed in that list.

+6
chocolate.camera 8 years ago
There is more. Since it does not use the standard way to store a list of Recent Files (~/Library/Preferences/com.sublimetext.2.LSSharedFileList.plist), they are not listed in Lion when in App Expose at the bottom, LaunchBar cannot access the list by invoking the app and digging into it, and I am sure there are other 3rd party apps that rely on the standard method that cannot access Sublime Text 2's Recent File list either.

There is a reason why there is a standard method to store the list of Recent Files.

+5
aristidesfl 8 years ago
So it seems there are 3  main problems:

Fix: Files opened using the Sidebar or "Goto Anything" should not be displayed in the list

Fix: Write the list also to ~/Library/Preferences/com.sublimetext.2.LSSharedFileList.plist when on OS X

+3
jeandeluxe 8 years ago
My 2¢ on the ideas mentioned in this thread:

+1
aristidesfl 8 years ago
Files and folders are already separated. This is not 100% good since this way one cannot compare chronologically a file in relation to a folder... Not sure which solution is preferable.. maybe there should be an option for that too

+2
Hans 8 years ago
I really think this should be implemented in a better way cause I am also Launchbar User and can't use the recent list of Sublime2. Launchbar states that it works for "cocoa" but not for "carbon" based applications. Is that the culprit and can it be fixed?

I agree with all suggestions, especially the OSX integration for the preferences-file. This file is important to be able to open recent files via the app's context menu in the Dock.

>Fix: Write the list also to ~/Library/Preferences/com.sublimetext.2.LSSharedFileList.plist when on OS X

+1
Zev Eisenberg 8 years ago
This one feature may make all the difference as to whether I switch to Sublime Text. What would be the best way, if there is a way, to go about lobbying the developers to add this? I'm new to Sublime Text, so I don't know how the community operates.

+3
aristidesfl 8 years ago
Some options:
1. Get a lot more votes.
2. Sent resented heartfelt emails directly to John about this.

3. Write a blog post about how sublime text 2 doesn't play well with OS X, and take advantage of Mountain Lion momentum to make it reach the top hacker news. Make sure John see's it.
The first would be the polite way to go, but you probably can't compete with the other features which are OS agnostic and have much more popularity.
If you are not afraid to play dirty, the last would probably be the most efficient. Also it would help to get mor votes indirectly.
Choose your poison

This is the one feature keeping me on TextMate... I open all my recent files and projects by doing a three finger swipe down and clicking from the recent list.

Too bad it's been broken for so long. I guess the authors don't see the value in this very Mac-like workflow.

It would be good to see an acknowledgement that this topic has been considered.  I am surprised that better integration with quicksilver and generally OSx hasn't been requested more. Sublime has always seemed to me to be a swiss army knife tool that can do it all, it would make sense that when there are other apps with that really speed up workflow, integration with them should be encouraged.  After 11 months this thread doesn't appear to welcomed, it deserves better attention, and at least a standard acknowledgement that it is being considered.

This is an absolute deal breaker. I'm not going to click through dialogs to re-open a file that I was just looking at, especially when the OS already provides this functionality universally. What's more alarming, from the perspective of whether to invest in a closed-source text editor like this, is how such a crippling -and yet trivially solvable- issue as this has been ignored for so long.

I would also like to suggest that the "Open Recent" menu is also placed in the dock icon menu. I use "Open Recent" a lot, and find it anoying that I can't use it like in Excel: 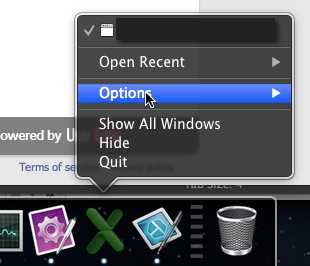