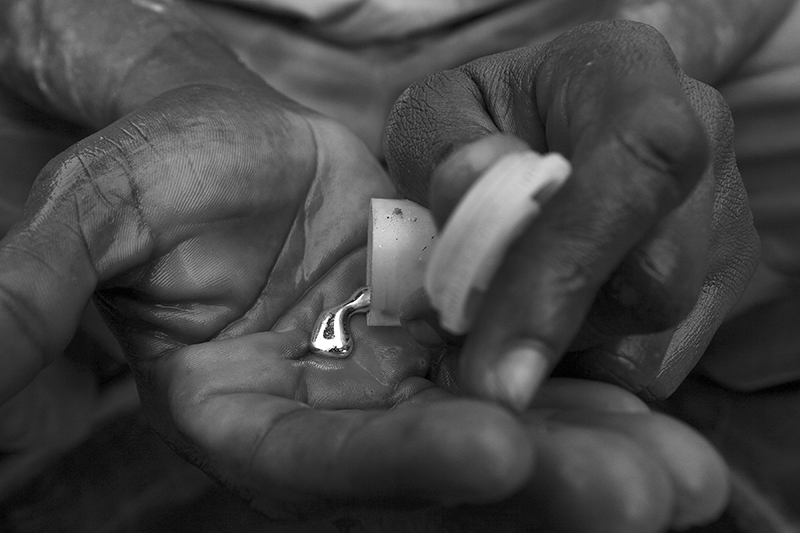 ECONOMIST | NESTLED in a former cocoa-farming region in southwestern Ghana, the town of Prestea boasts more than 150 small-scale gold mines in the backyards of abandoned farms. The town, with a population of about 35,000, also sits covered in permanent smog—a red dust that stains white goats crimson. It is the result of lethal mercury, on which miners all over Ghana rely to refine their gold. In Prestea, where gravediggers are in greater supply than doctors, death from mercury poisoning is routine.

“There is a sickness in us. We can die from the dust. It sometimes gives us many sicknesses, in your liver and in your heart,” explains 27-year-old Abu Quarm. He has been mining for ten years, rising with the hot sub-Saharan sun to work 12-to-14-hour days in the open-air mining field in the back of his deceased brother’s house. Mr Quarm explains that just a few months ago, he lost his brother to the sickness: it began with dizziness and migraines and evolved into exhaustion, a loss of appetite and spastic episodes. Few small-scale miners in Ghana are taught to identify the harmful health implications of mercury. No official statistics exist, but Mr Quarm reckons Prestea averages ten mining-related deaths a month.

Brandishing from his pocket an eye-drop-container-sized white bottle of mercury and squeezing the liquid metal into his bare hand, Mr Quarm says there can be no gold without mercury. All miners use the dancing liquid metal, he explains, because it pulls gold dust together into a solid nugget. The miners then burn this to get rid of the mercury, producing solid gold, as well as the red smog that pervades the town. Mercury sells for about 40GH ($20) a bottle and is shipped in legally, primarily from China, to Ghana’s major ports.

Ghana has the highest mercury emissions in Africa, but the problem is widespread. In the past few years, tens of thousands of small-scale mining sites have surfaced across Asia, Latin America as well as other parts of Africa. The United Nations Environmental Programme (UNEP) estimates that between 1,000 and 4,000 tonnes of mercury are released into the air and water globally each year.

Which is why, after four years of negotiations, UNEP is organising the first global conference to confront rising mercury emissions and the threat to the environment. In January 140 countries signed and ratified the Mercury Treaty, agreeing to cut mercury pollution by setting enforceable international limits; now a conference will convene on October 9th in Minamata, Japan to put the plan into action.

But in countries like Ghana, where mercury is legally accessible on the streets and deeply engrained in the mining culture, many are sceptical about what the meeting can accomplish. The alternatives used by big mining companies, which involve heavy machinery and cyanide, are costly and time consuming.

“Try to put yourself in their shoes,” says Gavin Hilson, a mining expert at the University of Surrey.

“Some people drink tea with too much sugar or smoke a lot, and we know it’s bad. We’re trying to tell villagers who have been using mercury their whole lives to change their method. There needs to be a constant presence in that village, to continually educate these people and show them that there are viable alternatives. It’s a collective responsibility.”