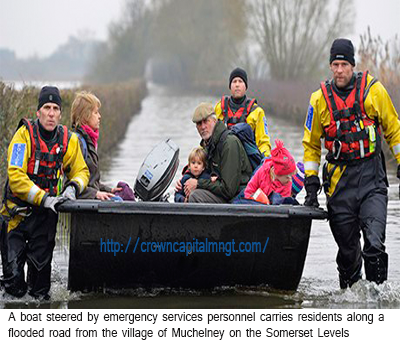 “You are looking at retreat,” says Prof Colin Thorne, a flooding expert at the University of Nottingham. “It is the only sensible policy – it makes no sense to defend the indefensible.” This assessment of how the UK will have to adapt to its increasing flood risk is stark, but is shared by virtually all those who work on the issue.Centuries of draining wetlands, reclaiming salt marshes and walling in rivers is being put into reverse by climate change, which is bringing fiercer storms, more intense downpours and is pushing up sea levels. Sea walls are now being deliberately allowed to be breached, with new defences built further back, and fields turned into lakes to slow the rush of the water, as flood management turns back towards natural methods.Thorne says the strategy of once more “making space for water” has been around for a decade, but the urgency of implementing it has increased sharply. “We thought then we were talking about the 2030s, but it is all happening a heck of a lot quicker.”

Large parts of southern England had their wettest January ever recorded, the Met Office announced on Thursday, and the Somerset Levels, much of which is below sea level, have been inundated for weeks. “I have enormous sympathy for these people,” says Thorne. But he thinks the 1,000-year history of keeping the sea out of the area is coming to the end. “Can the Somerset Levels be defended between now and the end of the century? No,” he says.


Hannah Cloke, a flooding expert at the University of Reading, agrees: “We could make the choice to protect the Levels forever, but that is going to take a lot of resources. My gut feeling is that you are going to have to let that be a marshland in the end. But people live there and have their livelihoods there, so it is very tricky.” Cloke says greatest priority across the country is giving people the help they need to adjust to more frequent floods, from warnings and emergency planning down to home-level protection, such as water-absorbing green roofs and porous paving stones. She points to a small but growing trend of riverbank homes being raised on stilts.


“We have to realise we cannot defend at all costs. We have to adapt to climate change,” says Professor Rob Duck, a coastal expert at the University of Dundee, noting that Hull, Norfolk, Suffolk, Essex, Sussex and the Wirral are places at risk. “Building higher and higher walls is not the answer.” Big flood defences often just shift the problem elsewhere, he says, or cause an even greater catastrophe when they eventually breach.


Ola Holmstrom, UK head of water at consultancy firm WSP, says the hard choices must be taken soon: “Unfortunately increasing urbanisation and climate change means the question of flood risk management is not going to go away. Someone will need to make some tough decisions, and for the benefit of those currently flooded and those whose livelihood depends on the land, it would be best if this happens sooner than later.”


Government-funded landscape experiments in Somerset and Yorkshire are demonstrating that blocking upland drainage channels, replanting trees next to rivers and deliberately flooding fields can protect downstream homes by slowing the flow of water, which stops waters rising fast and reduces the silting up of channels.


“In the UK, going back to nature is the right way to go: it works,” says Cloke. “We have tried the engineering solution and the cost of maintaining that is very high and we just don’t have the money to maintain these standards.” The government’s annual funding for flood defences is falling by 15% in real terms under the coalition, while the risk of flooding is rising and is the greatest impact of climate change, according to government scientists.


Making more use of land to hold back flood water will have the greatest impact on farmers, who manage two-thirds of the UK’s land. Paul Cottington, south-west environment adviser for the National Farmers’ Union, says: “The land has been modified for centuries and there’s a reason for that: we have very good productive farmland.” He says every 100 hectares of land can feed 400 people, and that some farmers are already working in uplands to help alleviate flooding. But, Cottington says, farmers could provide flood relief with their land, if paid for that service with long-term agreements, and he points to an existing scheme in Kent that protects Tonbridge in this way. Thorne says bluntly that such changes to farmland are inevitable: “Get used to it, guys.”

On the future of the Levels, Cottington says: “In the long term, the Levels can be whatever they need to be. They are what they are through human effort but what they become should be decided by the people who live and work there.”
Despite the consensus that more coastal and flood plain land will have to be used to make space for water, the experts are also clear that major concrete defences will still be needed in urban areas. Alastair Chisholm, policy manager at the Chartered Institution of Water and Environmental Management, says: “We need to recognise the real value of protecting large, low-lying communities and economically important land. The idea of moving large communities, like flood-prone Hull for example, is a very difficult to contemplate. In the Netherlands, they know that ultimately they have little option but to defend and hold the line at significant cost.” He says accepting the big price tag that has to be paid – increased flood defence spending on towns – may in the end be most socially acceptable course in built-up areas.
However, outside major towns and cities, the Environment Agency has long accepted that retreat is inevitable, stating in 2008: “We are not going to be able to hold the line everywhere for ever.”
Thorne agrees: “You are going to lose the battle one dark night and it will be brutal. I think we can be more civilised than that and plan ahead. We need to [beware of] hubris and know that if we fight nature, we will lose in the end.”